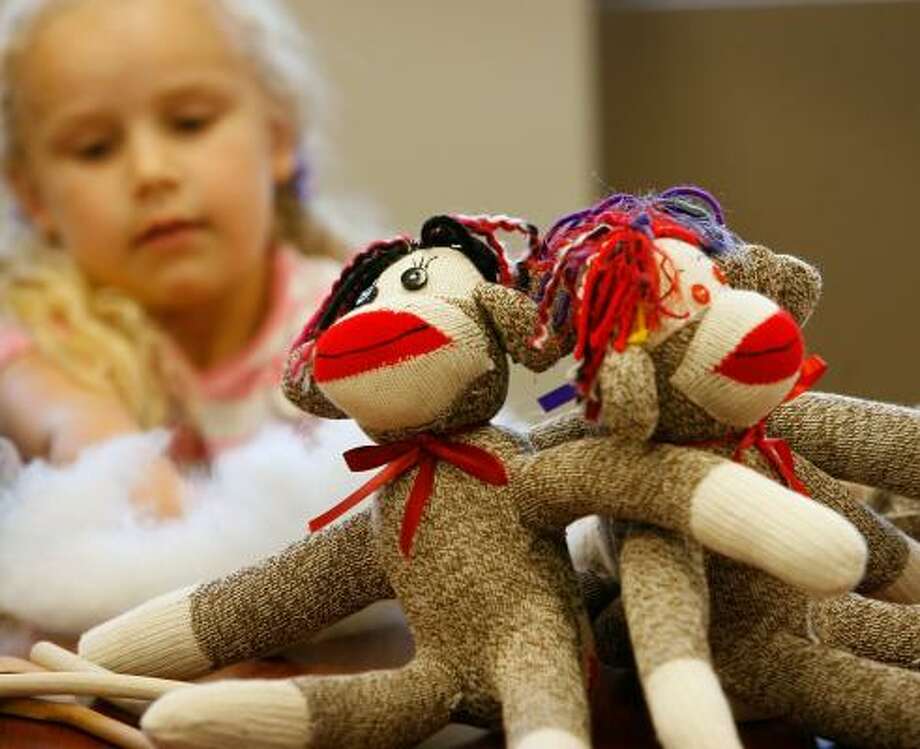 The Sock Monkey Ministry started as a mission outreach project for our 1st and 2nd grade Sunday School classes in February 2005. The project is the brain child of a 41 year old woman who, though largely confined to her house and struggling with metastatic breast cancer, decided that she wanted to both teach service to the children of the church and continue to serve God in spite of her own disabilities. Sock Monkey Ministry has provided 11,500 stuffed animals to orphans and disadvantaged children in over 36 states. It has reached beyond our borders to provided sock monkeys to orphans in Russia, Bosnia, Latvia, Guatemala, and Honduras, Argentina, Iraq, and Afghanistan. From its start in February 2005, the ministry has spread beyond the walls of the church and has involved more than 500 children at Colony Bend Elementary School in Texas, 400 students from Chelsea, AL, sororities and fraternities at Texas State University, numerous elderly persons in nursing homes and homebound in Texas, Alabama, Ohio, and members of other churches and faiths. In January of 2006, God led the VanSickle’s to Alabama where the ministry has spread to various Churches, communities and organizations as well. Sock Monkey Ministries has developed in Ohio, Colorado, Texas and Alabama, Nevada, PA, VA, MO, GA, IN, MD, and Kansas. The growth of the program has been explosive.

What is the result?

The impact of the ministry has been widespread. From the Alzheimer’s patient who feels useful again helping his daughter bag up monkeys, the elderly woman who sews monkeys while sitting with her sick husband, and the homebound who find a way to serve from their home the ministry has provided a new avenue for service. Next there are the children in our community who are both learning about others who are less fortunate than them and the blessing of service. Lifting the spirits of our service men and women as they fight for our freedom in the war on Terror. And finally we have the orphans or children in protective custody who receive these sock monkeys. Many of these children come from abused homes and the stuffed animals give them something to cling to and hold while adjusting to a new living situation. As a representative from one children’s home said the stuffed animals provide comfort to children who come to them with nothing more than the clothes on their backs. Donna Smith at Presbyterian Children’s Homes and Services put it another way saying, “a handmade treasure is a glimpse of hope in their dark world.” What a blessing to be able to touch a child in such a positive way. Sock Monkey Ministry seeks to reach out and touch a child’s life, one monkey at a time.